I know that this subject has been blogged about numerous times but I thought I’d post an alternative way of shredding a comma separated string to a table that I come up with today, albeit with help from the very clever Itzik Ban-Gan cross join nested CTE that many of us use to generate large tally tables quickly.

For sure, in the ideal world we wouldn’t have to do this as there isn’t an easy and efficient way to do this in T-SQL. There are much better ways of passing this type of data to the SQL server, i.e. XML or table valued parameters, but sometimes we aren’t in control of what and how data is being sent to and from the SQL server so we have to engineer these not so ideal solutions. Also the point of this post was more about me having a little fun and share those results with you and not about proving either way which technique is better. Different environments and workloads will always require you to evaluate all methods to see which is best. There are half a dozen and more techniques to split a comma separated string to a table and this afternoon I hope that I have added another way to that list!

So first of all, let us deal with the easy part of generating a comma separated string from a column in a table. For me there is only one real technique of doing this so I’m not going to spend too much time writing about it but I wanted it here for completeness.

Unfortunately converting a comma separated string into a table isn’t as easy. Well, I mean it is fairly easy to do it, but there isn’t a nice and clean way of doing it. .net developers are blessed with the string method .Split() and yes creating a CLR to chop up these strings is definitely one good option to achieve this if that is what you decide to do. Other options to chop up a string to a table include:

Although I’ve always thought that doing the xml technique is probably consistently the quickest, I was quite intrigued by the tally table approach and I wondered if I could use the same method but eliminate the tally table thus saving those valuable reads. After pondering on the problem for a short while I recalled the Itzik CTE tally table and proceeded to try and use that instead of an actual tally table.

So here is my first attempt at doing this: 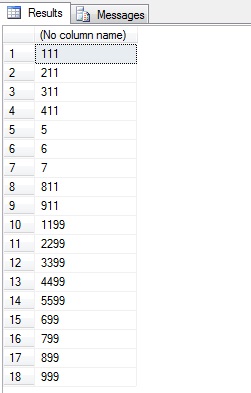 Perfect, all looks good to me. And the execution stats look good as well. A short amount of time to compile the first time around, then nothing each time afterwards.

Lets crank it up to a fairly unrealistic level to see what happens. I’m going to run the same script again but with a comma separated string containing over 2000 values and to compare performance, we’ll use the tally table example. I’m not going to post the new string here as it’ll just wrap loads on this post but the script is available for download at the bottom. So here are the results from profiler for the same query but processing some 2000 values.

Still very good times and I’m more than happy with those sort of figures coming from my rather basic desktop.

Now I grabbed the code from the other SSC article and after substituting the comma separated string for my one, I ran the query 4 times to compare the performance.

Great stuff. But, will it beat the xml technique using the same comma separated string? (script at the bottom)

No it does not, or at least not in this example with my first version above. The xml technique is similar with CPU/reads but duration wise, it is consistently quicker by a fair margin and I believe the margin to be too significant to try and rework my first version of the query to a second version. Maybe I can get it closer, maybe not. That isn’t really the point as although my experiment has failed in terms of performance compared to the xml technique, I hope that this post shows that with a bit of thought, the very clever Itzik CTE can replace the traditional tally table and give some significant performance improvements. And with regards to converting a comma separated string to a flat table, I’d more than likely use the xml approach!